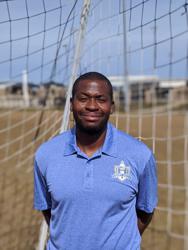 We are excited to announce that Chris Handy has been appointed Head Coach for Port City's inaugural season in the NPSL.

"Good things keep coming for us here at Port City and this is the icing on the cake." Said Port City's General Manager, Luke Berry.

He continued, "Chris brings with him a wealth of experience and is extremely well connected across the country which we hope will help us bring the very best talent to the Mississippi Gulf Coast".

While at FIU, Handy graduated with a B.S. in Exercise Science. Soon after he pursued his MSc in Education and Kinesiology at University of Texas.

Handy then embarked upon his coaching career by starting as an assistant at Tyler Junior College. During his time there, the team had a 89-9-6 record with back-to-back NJCAA titles in 2009-10. They followed that with a 3rd place finish in 2011. During this time, the team was named to the NJCAA Hall of Fame.

Due to his impressive record at Tyler Junior College, Handy was appointed Head Coach at Mississippi Gulf Coast Community College ("MGCCC") and is still there today. He currently has a 90-45-8 record and has reached four state finals in the past six years.

During his time at MGCCC, Handy has picked up a huge number of awards and recognitions, including: